The tornadoes, high winds, and thunderstorms we've had around lately left the area with damaged buildings, vehicles, and trees. If you have damaged trees, make sure you keep a few points in mind when assessing the damage.
Once you've assessed your tree, make a decision. If it's a keeper, prune the broken branches, repair torn bark or rough edges around wounds, and let the tree begin to heal.
When pruning a damaged tree, cut all damaged branches at the nearest lateral branch, bud, or main stem- not in the middle of the branch. If you can't save the tree, or the damage is too severe for you, contact an arborist for help.

For more information on repairing storm damaged trees, visit these two websites I used for parts of this blog article- agrilife.org and texashelp.tamu.edu.

Our livestock and veterinary extension entomologist shared the most recently updated map for those of you following the cattle fever tick outbreak. Please read over this newest report below. 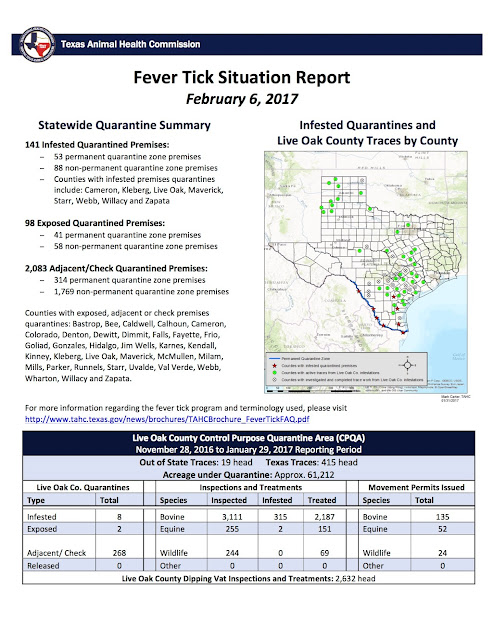 Give us a call at our office, send me an email, or stop by if you have any questions or concerns. Have a great weekend, everyone.

Posted by Kate Crumley No comments: 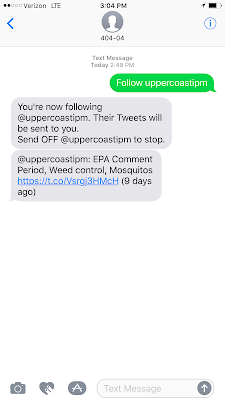 The growing season is almost on us, I know many of you are in the field either treating weeds or fertilizing currently. Once I start scouting again this season, I plan on using twitter to post short updates while I am in the field. If you do not follow me on twitter, or do not have a twitter, but would still like the updates, you can subscribe to text message updates on your cell phone. If you would like to receive the text updates, text "follow uppercoastipm" to 40404 on your phone, as shown to the right.


We recently received notice that sulfoxaflor (Transform) was granted the section 18 emergency exemption by the EPA for control of sugarcane aphid on grain sorghum again. Management of the sugarcane aphid would be increasingly difficult with only one option in our toolbox, it's good to know we'll have two options again.


by Steve Byrns, Texas A&M AgriLife Communications
COLLEGE STATION– Texas cattle fever ticks, which made Texas longhorns the pariah of the plains in the late 1800s, are once again expanding their range with infestations detected in Live Oak, Willacy and Kleberg counties, said Texas A&M AgriLife experts.
As of Feb. 1, more than 500,000 acres in Texas are under various quarantines outside of the permanent quarantine zone.
Dr. Pete Teel, Texas A&M AgriLife Research entomologist at College Station, said the vigilance and cooperation of regulatory agencies, namely the Texas Animal Health Commission and the U.S. Department of Agriculture and the Animal and Plant Health Service, in collaboration with the livestock and wildlife industries are needed to detect, contain and eliminate cattle fever ticks.
Because there is no cure for tick fever, a series of quarantine levels are used to prevent animal movement and the spread of a fever tick infestation, and to permit animal treatments for tick elimination. For an explanation of these quarantines see http://bit.ly/2jkqTNX.  For the current situation report, see http://bit.ly/2l3hhba.
“We’ve been responding to calls for several weeks now stemming from this outbreak,” said Dr. Sonja Swiger, AgriLife Extension veterinary entomologist at Stephenville.
“Most of Texas has been shielded from this problem for so long that there is little memory of what it took to be able to enjoy the benefit,” she said. “Now when producers are confronted with the issue without knowledge of the history and biology and risks associated with cattle fever, they are overwhelmed.”
Teel said the historic cattle drives from Texas to railheads in Missouri and Kansas in the late 1800s brought unwanted attention when local cattle died of a strange fever associated with the arrival of Texas cattle.

“Texas cattle fever was ultimately linked to ticks brought along by the Texas longhorns,” Teel said. “These ticks were appropriately named Texas cattle fever ticks, due to their ability to transmit a fever-causing agent from infected to uninfected cattle.”
By 1906, Teel said, it was determined these ticks and Texas cattle fever were found throughout 14 southern states and were limiting the economic development of the region. It was also discovered that procedures separating cattle from these ticks was essential to disease prevention and tick elimination.
“State and federal eradication programs with industry support began in 1906 and slowly eradicated the disease by eliminating these specific ticks from the eastern seaboard to the Texas-Mexico border, a task declared completed in the 1940s,” he said. “A permanent buffer zone was created and has been maintained ever since along the international border from Del Rio to the mouth of the Rio Grande to prevent re-establishment of ticks from Mexico where both ticks and pathogens remain.”
Since the 1970s, there have been periodic incursions of these ticks into Texas. One such incursion is happening now, requiring quarantine and eradication to prevent their spread, he said.
“Decades of changes in land-use, brush encroachment, expansion of native and exotic game, diversification of animal enterprises and variation in climatic cycles are contributing to new challenges in keeping this problem at bay.”“However, the success of this program has protected our cattle industry from the risks of disease outbreaks by preventing contact with the tick vector for so long that most people do not remember the tremendous effort and significant benefits, and are often unaware that this risk still exists,” Teel said.
How risky is the disease? Teel said the Southern Region of the U.S. is home to more than 400,000 cattle operations producing a third of all fed cattle in the country. This region is the original distribution location of these ticks before the eradication program, and climate modeling indicates it would still support these ticks today.
Mortality in cattle without prior exposure to the disease is estimated to range from 70-90 percent. There are no protective vaccines and no approved drugs to treat sick animals in the U.S., he said. The U.S. Department of Agriculture has estimated that if eradication of these ticks had not occurred, cattle industry losses across the southern U.S. today would be about $1 billion annually.
The technical name for Texas cattle fever is bovine babesiosis, a name related to the organisms that infect the red blood cells of cattle. It is their destruction of the red blood cells that results in anemia, fever and death, Swiger said.
“There are two closely related tick species capable of transmitting these pathogens, one called ‘the cattle tick,’ Rhipicephalus (Boophilus) annulatus, and the other called ‘the southern cattle tick,’ R. microplus,” she said. “Both of these tick species and associated pathogens were introduced to the Western Hemisphere on livestock brought by early explorers and settlers from different parts of the world.”
The origin of the cattle tick is the Mediterranean area where climates are relatively temperate, while the southern cattle tick is from the tropics of the Indian sub-continent. Thus, they were both successful in adapting to the southern climates of the U.S., as well as similar climates in Mexico, Central and South America, Teel said.
Teel said fever ticks remain on the same animal through their larval, nymphal and adult stages all the way through until the blood-engorged females drop off the host animal. Once off the host, females lay from 2,500-4,000 eggs, and then die. The males remain on the animal to mate with more females. It takes 20 days from the time the larvae arrive on the host animal until the first females start dropping off with the most females leaving the host at about Day 25. So, animal movement during this period allows ticks to be dropped into new locations.
“A successful hatch depends on moderate temperatures and high relative humidity more common to tree and brush covered areas than to open meadow or grass habitats,” Teel said. “If ticks pick up the pathogen from their host during blood feeding, the pathogen is passed through the egg to the larvae of the next generation. No other tick species in the U.S. are capable of transmitting the pathogen of Texas cattle fever.
“Cattle are the preferred host and back when cattle were basically the only host, the ticks were much easier to control,” he said. “Today white-tailed deer and several exotic ungulates including nilgai antelope serve as hosts. Nilgai, an imported exotic species that have naturalized in much of South Texas, are native to India and were historically noted as a host animal for the southern cattle tick in India. So what we’ve done is bring both the ticks and nilgai together again.”
While there are many challenges to optimizing tick suppression where there is a mix of cattle, wildlife and feral ungulate hosts, Teel said research and technology development are providing new tools to meet these challenges.
“AgriLife Research and the USDA’s Agricultural Research Service are collaborating to discover new and improved methods of detecting and eliminating cattle fever ticks,” he said. “These efforts include mining sequences of the DNA of both tick species to discover sites to disrupt functions such as tick feeding or egg laying, to identify targets for new pesticides, or genetic approaches for tick suppression or prevention of pathogen transmission.
“There is evidence that the manure of tick-infested cattle contains detectable differences in chemical makeup compared to non-infested animals and may provide for improved methods of tick detection,” he said. “And, the complex interactions of tick-host-habitat-climate relationships through simulation modelling are currently being investigated to improve tactics and strategies for tick elimination where both wildlife and cattle are involved.”
To learn more, Teel and Swiger recommend using Tick App, a free smartphone application available at http://tickapp.tamu.edu, and the Texas Animal Health Commission’s website at http://www.tahc.texas.gov/regs/code.html for information on tick treatment options, tick quarantine and associated regulations, as well as the latest updates on current quarantines. 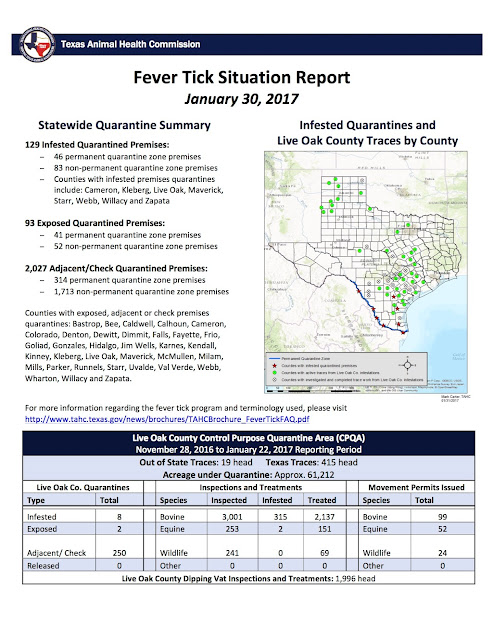 Don't hesitate to give us a call or drop by the office if you have any questions or concerns.